Leontia Flynn’s The Radio is out this month, so WFU Press interns gathered to ask the poet more about her newest collection. Written in three sections, The Radio explores the boundaries of home and family life from Flynn’s experience caring for her infant child, to coping with her father’s death, to remembering the influence of poets like Seamus Heaney. Here, the poet discusses these themes, and the role of social media in both her personal and professional lives.

WFU Press: You use D.M. Winnicott’s child development guide The Child, the Family and the Outside World as a framing element for the first two sections, and paraphrase it directly in the First Dialogue of the third section. What was your exposure to this book, and why did you choose it as a common thread?

Flynn: The first poems in The Radio were written when I was writing pretty intensely, with all the single-mindedness, or selfishness, you need for that. But there was also a baby, so I had the added job of creating what I believe Winnicott calls a “containing environment.” I re-read The Child, the Family and the Outside World back then because it’s usually considered positive for not thinking in terms of an idealized mother figure (Freud has no idea at all)—but I still thought Winnicott presented the arrangement as more instinctive or passive than it is, or that it was very much an external view. I think when I write I feel close to my own childhood, which seems to have made me weirdly imaginatively isolated, so I used the reference to remind myself at least that I was operating on both sides of that child/parent divide.

There are several poems here about motherhood—either your own mother, or yourself as mother—and all with a somewhat dark bent. In “The Radio” you mention “the Heart of Darkness” that is motherhood. How has having children affected your work?

I was already interested in writers’ mothers (I wrote about them in Drives), and just take for granted that that relationship is formative in needing to write poetry. I suppose I buy into feminist ideas that 19th century “hysterics” were artists who couldn’t or weren’t in a position to make their own meanings. And I also think that writing poetry, as connected to a kind of interior listening and alternative (very un-literal) form of communication, has some origins in pre-social experience. Are they dark?  I was probably pretty dark already, and am fairly cheerful and upfront about it. I should say that I had egalitarian and perhaps unconventional parenting arrangements, and found a lot of the early years incredibly positive. I liked how antisocial it was—and funny, and properly meaningful in a way lots of work (other than writing) isn’t. I did have the experience, though, of finding that the continuous, shifting nature of a parent/child relationship wasn’t very well represented culturally. It took a couple of years for things to get really bad. But a lot of more recent books have presented motherhood in brilliant, properly revolutionary ways (I loved Maggie Nelson’s The Argonauts and Jenni Offill’s The Department of Speculation), so maybe the conversation about it will change.

Actually, where my poems in The Radio are definitely dark is in thinking of what it must have been like for my own mother to raise five kids during a time of violence in Northern Ireland—given that it’s hard on the nerves as it is. I actually heard the anecdote about women from West Belfast queuing up for weekly prescriptions of Valium from someone else, and I thought “well of course they were…” So I put that in the title poem.

There were Catullus poems in Profit and Loss, and we have a few poems “after Catullus” in this collection. What draws you to his work?

I like short poems, and the first poems I wrote were very short and tried to create a sense of me as a young person in the world. Catullus’ poems are short, and funny and the diction is obviously all crystal clear, though I have limited Latin. I like that he hates everything, and writes about love and friendship as well as politics—and I like the ambivalence around gender and desire, which feels relevant and very contemporary to me. Above all I just like the process of writing these versions, because it involves getting a sense of the poems’ sound and rhythm before necessarily knowing the meaning and then reworking the sense and voice to fit that. That impersonal process, which you then make personal, is very absorbing and liberating.

You’ve written a dissertation and then published a book on Medbh McGuckian. Has her work influenced your own writing? And many of your poems refer to or draw from other poets—Seamus Heaney, Gerard Manley Hopkins, Michael Longley, Eavan Boland, Derek Mahon, to name a few. Who would you consider to be your greatest poetic influences?

Medbh McGuckian’s debut and early books were game-changing-ly brilliant and it always bothered me that she wasn’t quite recognized the way her postmodern male contemporaries were. Because the ideas she played with involved gender—and motherhood indeed—she was often read back towards more conventional, familiar ideas of female identity. Having said that, I never tried to sound anything like her. I thought it would be interesting to write a book which didn’t over-identify with the work. I read her generation of Northern Irish postmodernists (Muldoon and Carson) after avoiding it all for a long time because it seemed too close to home; then I read back to Longley, Mahon, Heaney. I like anyone who’s good, and you read to find the bits that seem to you like the things you could do, and then the things they do that you can’t. I also liked a fair amount of English and Scottish poetry, and the mid–Twentieth Century Americans (Berryman, Lowell, Bishop—also Plath and Marianne Moore) for pattern-making and general nuttiness. I don’t think influence works the way people think it does. I’m now trying to read very different poetry. I felt that when I wrote “Letter to Friends” from Profit and Loss I very deliberately went into reverse from the kind of elusiveness and fragmentation of the postmodern work I’d loved, and I found that exciting. The writers in the generation below me that I like take fragmentation and elusiveness as their point of departure, so I’m trying to read poetry which provides a touchstone for them. By this I basically mean I’m belatedly reading Ann Carson properly.

“August 30th 2013” is a particularly moving poem in this collection. How long did it take you to write it after Seamus Heaney’s death? Was it an instant response, or did it come about over time? How does the poem reflect your relationship to Heaney’s poetry and its position in the canon?

“August 30th 2013” is kind of a coda to “Letter to Friends,” and I wrote it slowly over the year after Seamus Heaney’s death.  Like the earlier poem, it was more a kind of diary about what was going on than a conventional elegy—and I fretted a little about the kind of familiarity it presumes, because whereas the earlier poem was addressed to imagined contemporaries, addressing a dead writer obviously has a very different resonance. At the same time, faced with the outpouring of emotion here after Heaney’s death, my response really was to go the library and read the work and interviews again. Anyone who keeps writing is an inspiration. That’s it really—that and his variousness. It seemed to me at the time that poetry and the arts were being culturally demoted—or emptily celebrated, which was worse. I regretted that there was no poet with Heaney’s kind of stature and cultural reach. I’d got tired of giving poetry readings, and basically wondered why I had bothered writing the last book. I wrote the poem less out of any analytical sense of Heaney’s position than to talk myself out of my depression. Actually, I wrote quite a long essay about it all for the Irish University Review, then realized I hadn’t published the poem.

I wrote about social media in “Letter to Friends” too. I’d known some coders and people involved with technology, and maybe I was a reasonably early adopter in a kind of inept, prone-to-breaking things way. So it might have been because most of my interaction with the “outside world” was conducted via a screen that I started to find it so alarming very quickly. Or perhaps I found it more invasive and alienating because my inner world was already under pressure from having a kid. Either way I quickly found the self-representation on social media empty and also strangely embarrassing. I couldn’t understand why turning everything into a popularity contest didn’t seem like as bad an idea to everyone else as it did to me. I thought the narcissism and fragmentation of it all was the last stage of postmodern fragmentation, with quick-fire hypertext replacing intertextual allusion: all kind of calamities. The worst thing about social media now is how it bullies people into conformity, even people with whom I formerly agreed.

But I think that most of my reaction is down to a strange dissonance I feel between my private self and social self anyway. That is, that the “social” rather than the “media” was the problem. Or that poets and artists always think the world is dumb and hostile, and social media was just a new way for it to be dumb and hostile. At any rate, now that it has provoked its crisis I feel more cheerful about it. I presume all the feel good-consensus will give way to arguments, from the antisocial and discontented and alienated, about art-for-art’s sake and poetry as its own interior meaning-making machine. That’s o.k. by me. 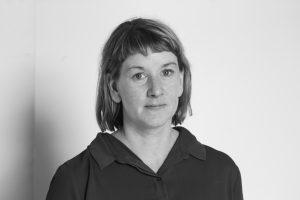 Leontia Flynn was born in County Down in 1974. Her first book, These Days (2004), won the Forward Prize for Best First Collection, was shortlisted for the Whitbread Poetry Prize, and saw her named one of twenty “Next Generation” poets by the UK Poetry Book Society. Drives (2008) earned her the Rooney Prize for Irish Literature and a major Individual Artist’s Award from the Arts Council of Northern Ireland. Her third collection, Profit and Loss, was a Poetry Book Society Choice for Autumn 2011 and shortlisted for the T. S. Eliot Prize. The Radio, her newest collection, was shortlisted for the T. S. Eliot prize and received the Irish Times Poetry Now Award.

Flynn was awarded the Lawrence O’Shaughnessy Award for Poetry in 2013 and the AWB Vincent American Ireland Fund Literary Award for 2014. She lives in Belfast and teaches at the Seamus Heaney Centre for Poetry at Queen’s University.

Flynn’s book, The Radio, will be published on April 1st.