Home  ›  An Interview with Ciaran Carson

An Interview with Ciaran Carson 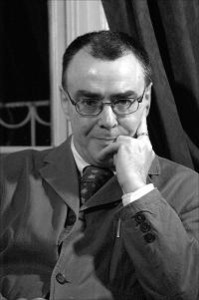 Ciaran Carson recently took some time to have an email conversation with WFU Press intern Matt Liberti about his two newest volumes. Here’s their exchange.
Q. The two new volumes, On the Night Watch and Until Before After, resemble each other in terms of structure and form more than any two of your other volumes. To what extent and in what ways do they converse with one another?

A. Both books came out of the same experience. Briefly, my wife Deirdre was diagnosed with a pancreatic tumour a while back. After scans and tests, it was felt that the tumour was non-malignant and that an operation would not be necessary. On the Night Watch was written out of that. Then, a year later, it was found that the tumour had increased in size and it was decided to operate. I’m glad to say it was a complete success, but it is a daunting procedure. Until Before After was written out of that anxiety. Among other things, it’s trying to examine how our sense of time is distorted by the pressure of not knowing an outcome. So I found myself examining the nuts and bolts of the language, the little prepositions that can mean so much in terms of our positioning ourselves in relation to others and to ongoing time.
Q. What is the significance to the organization of the poems’ lengths in Until Before After? I have never seen its pattern of two poems with five paired lines followed by one poem with seven paired lines, and that structure deviates from On the Night Watchwith its poems’ consistent seven pairs of lines. Is this some play with the haiku structure? Is it a way to group the poems into trilogies as the volumes themselves are organized?

A. You’re right in thinking that both the haiku and the three-part structure are in there. As for the brevity of the lines, I wanted to put as much pressure as I could on the language by making line-breaks in unexpected and sometimes puzzling places. I think of many of the poems as verbal puzzles, where the syntax leads you to consider not one meaning for a sequence of words, but to open up other possibilities. As well as that, I see both books as forming large musical structures, like some kind of minimalist symphony.
Q. Despite their fragmented internal structure, the poems in the new volumes relentlessly converse with one another as phrases and themes reappear after lying dormant for several poems. How do you feel these structures enhance the poetry differently from the sonnet or song-like structures and long lines of your earlier volumes? Why does your poetry demonstrate shifting forms?

A. When a phrase or motif is repeated, its meaning changes in the new context. I’ve done similar things in the past in books like Belfast Confetti. I can’t say why the forms in which I write have changed so radically over the years, but it seems we should adopt new methods for new situations. The situation demands the form, and the fragmented if sometimes convoluted syntax of these short poems seemed appropriate to the subject.
Q. How do you generate ideas for these experimental forms? Do you find yourself fitting the words to the structure or the structure to the words?

A. I never know what I’m going to write until it’s written, but I begin with the aim that whatever it is, it should correspond to some internal rhythm or music. It’s more a process of discovery than of generation. The ideas come with the words, which sometimes seem to generate their own directions. A lot of the poems were written in a trancelike state.
Q. Time as a theme has characterized your poetry, especially On the Night Watch and Until Before After as well as For All We Know. The watch as an object figures prominently into each of these volumes, and you seem to play with the word “watch” as it also relates to sight. How do you feel your poetry depending on and existing independent from time? How do your poems function mechanically as clocks and yet deviate from perpetual situatedness?

A. The poems in the volumes you mention do act as registers of time passing or time past. But every time we read them (I hope) our sense of that time alters. Our memory of what has been is continually renegotiated in the light of the present.
Q. In a Bookslut review of For All We Know, Jason B. Jones explains that your poetry displays how “even a happy memory can knock us momentarily out of time.” In poems such as “As Arrows,” you discuss how “we / speed onwards / always looking / back”. To what extent does poetry function as a memory that can distance us from time’s constrictions, and do you deliberately try to establish poetry as such?

A. I think of a successful poem as a space which can be entered from many angles and by many people, each with their differing interpretations of the poem. A poem should stand for all time, but it will mean different things at different times to different people, including the author.