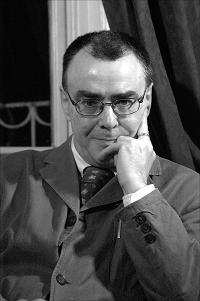 “Ciaran Carson is one of the best poets we have on both sides of the Atlantic and the publication of every one of his books is a major event in our literatures.”
– Charles Simic

Born in 1948 in Belfast, Northern Ireland, Ciaran Carson studied at Queen’s University, Belfast, where, from 2003–2015, he served as the director of the Seamus Heaney Centre for Poetry. After retiring from this post, he continued to teach a postgraduate poetry workshop there, in addition to overseeing the Belfast Writers’ Group.

Ciaran Carson, Irish poet, acted as an arts officer for the Arts Council of Northern Ireland early in his career (from 1975–1998). He was a member of Aosdána and a Fellow of the Royal Society of Literature. A writer of both poetry and prose—fiction and non-fiction alike—Ciaran Carson also translated many texts, including The Midnight Court, a work of the eighteenth-century poet Brian Merriman, and a version of Dante’s The Inferno, which won the Oxford Weidenfeld Translation Prize. His other awards include the first-ever T. S. Eliot Prize (1994, for First Language), and the Forward Prize for Best Collection (2003, for Breaking News).

As well as being a significant poet and careful translator, Carson was also a scholar of traditional Irish music; he frequently plays the flute alongside his wife, the accomplished Irish fiddler Deirdre Shannon. He has said: “I’m not interested in ideologies . . . I’m interested in the words, and how they sound to me, how words connect with experience, of fear, of anxiety . . . Your only responsibility is to the language.”

“One of the most gifted poets now writing in England and Ireland.”
– Ben Howard, Shenandoah

“He’s a kind of journeyman poet, he makes poetry out of the everyday things of life. In the best sense, he’s a throwback to an earlier time.”
– John Banville

“Carson . . . is a poet of witness to the Northern Irish conflict. He’s also compulsively playful, a colloquial, ultra-literary story-teller, who changes his formal game with almost every book. . . . Carson is so deliberate, so fastidiously lackadaisical, such a good yarn-spinner, and so fully there whenever he pauses, that he never loses you. Seeing where he’ll go next is enormous fun. . . . At his best, he’s better than almost anyone.”
– Daisy Fried, Poetry