Home  ›  Caitriona O'Reilly  ›  Poem of the Week: “The Antikythera Mechanism” by Caitríona O&#...

Poem of the Week: “The Antikythera Mechanism” by Caitríona O’Reilly

You may have already noticed the odd mechanical look of the Google logo this morning. To our delight, today’s Google Doodle celebrates the 115th anniversary of the discovery of the Antikythera mechanism, the first-known analog computer used by the ancient Greeks as a sort of calendar and predictor of astronomical positions. Caitríona O’Reilly’s poem about this very mechanism takes an intricate look at the ways we have tried, and failed, to capture time. 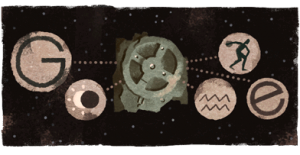 Too subtle to have been unique, a circular system
of fine-toothed gears in cedar, its wheeled delicate
copper-alloy movement, cranked by a handle, clicks and whirrs

so its incised texts rotate. This year: the colour is black, or
the colour is fire-red. Almost overlooked, dredged
through starless ages by a sponge-diver crippled by the bends,

the sea-bitten glyphs, friable as icing, say that knowledge is dust
almost, but this is the moon in a groove;
no vagabond, but modest and observable in all her pale steps

and lunations. Watching her narrow smile snagged
on the needle tip of the cypress, or floating brokenly
on a sea which admitted darkness but was never blue

must have suggested to him this gleaming planetary gearing,
since to cast bronze is to pray, and to beat metal is to give praise.
There was time in the town-square clepsydra but it trickled away,

he could never step into it again. These were the loved hours:
the poem of the moment, of pouring ripeness, when the breeze
drove the flame of its exact pattern across the corn.

interrogate, like this drowned analect of a mechanical age,
ever more precisely the same silence. Shall I find it?
Shall I become rich? Shall I live an object of envy?

Shall I die in my bed? But nothing, since the nice-fingered craftsmen
of Corinth set the gear-trains to a careful stargazer’s design,
has come close to an answer. Consult the oracle bones,

cast the yarrow stalks, inhale the fine particles of your trade
until they glitter in lung and bone. It is the distant ignition of stars:
you, this clock, this dust. The yes-no, no-yes of the pendulum.