Poem of the Week: “Santo Spirito Lands on Mars” by Medbh McGuckian 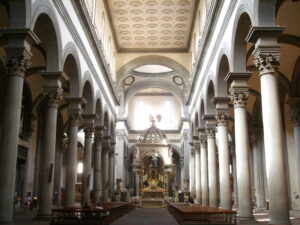 Medbh McGuckian’s “Santo Spirito Lands on Mars” paints an ethereal picture of the Basilica di Santo Spirito in Florence, Italy. In comparing it to Mars, the church is made into a heavenly sight, evoking a sense of reverence and awe despite the ordinary materials of its construction and its almost “toylike” appearance.

Looking at the picture seems almost a form of trespass:
it would never have shown itself as it did,
this finely chiselled scene, a red, cobbled road,
rust-red tiles that shiver in ordinary sunrays.

It is somehow toylike, the light that plays
is unashamed like the light after heavy rain:
stark rocks in a bay, shell-headed,
terracotta roundels to be held in the palm,

all carved from the softest pietra serena,
a metalwork collage, a scattered bombardment,
the plainest of stone in a great stone chorus,
a kind of stone bouquet high in the air.

Mistily distant, they might still be moving,
on their seismic way to somewhere else,
they might be only sinking into the ground
like the piecemeal stones of a city,

an image of Florence, another Athens
or a second Rome: a mosaic
of tanned memories, shadows of Byzantium,
craggy and barren view of the afterlife

whose infinite space has been bound here
into a nutshell, a weathered floor
where we might find it easier to walk
in the radiance of another planet’s days.