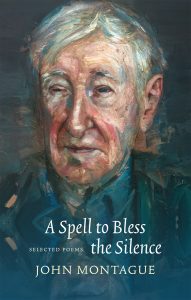 WFU Press is glad to announce the publication of a new selection of John Montague’s work. A Spell to Bless the Silence: Selected Poems includes work from fourteen volumes written over more than fifty years. Undertaken by Montague and his wife, Elizabeth Wassell, prior to the poet’s death in December 2016, this new selection represents “not only those poems beloved by the world, but those for which he felt a special attachment,” writes Wassell in the preface to the volume.

The title comes from the poem “Silences” from Montague’s 2011 volume Speech Lessons:

Poetry is a weapon and should be used,
though not in the crudity of violence.
It is a prayer before an unknown altar,
a spell to bless the silence.

The cover features a portrait of Montague, painted by Colin Davidson in 2014. Upon first meeting, the painter and poet connected over their shared stammers, and Davidson has said this painting shows Montague “carrying the weight of inner and hidden struggles. A stammer can propel you into other modes of communication, expression. His poetry reflects this.”

Michael Longley, a fellow poet, reflected on the impact Montague had on him from the start: “I took with me to university John Montague’s first slim volume, Forms of Exile. Over the decades I have eagerly awaited each new collection. Montague is a master of song. He has written great poems. He has written immortal poems. It is impossible to imagine the world of poetry (and my own inner life) without him.”

A Spell to Bless the Silence: Selected Poems will be published on September 1, 2018, and is available now for pre-order.