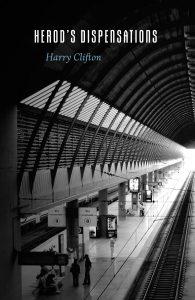 WFU Press is proud to announce the publication of Harry Clifton’s newest collection of poetry, Herod’s Dispensations. Meditating on the loss and protection of innocence, this volume encompasses journeys from Dublin through northern China. This new work follows two critically acclaimed volumes, The Winter Sleep of Captain Lemass (2012, shortlisted for the Irish Times Poetry Now Award) and Secular Eden: Paris Notebooks 1994–2004 (2007, winner of the Irish Times Poetry Now Award). Most recently, Clifton published an “effortlessly woven” sonnet sequence focusing on a particular Dublin district, Portobello Sonnets (2016). Sean O’Brian of The Guardian raves, “Clifton’s is a sophisticated and humanistic imagination, alert to the saving human detail and at some level always in search of the bigger picture.”

The cover of Herod’s Dispensations features a train station, reflecting themes of transience and movement throughout. The title is taken from the poem “A Flight into Egypt,” in which a couple has “gone into hiding,” planning only to return to their homeland “when the balance of power changed, and the attitudes.” The poem grapples with the tenuous position of migrants and ends with an ominous and important question:

…I ask myself
If ever it might happen again—
Protection of innocence, Herod’s dispensations,
Transit lounges, midnight railway stations—
No, not even whether, only when.

In addition to poetry, Clifton has written prose and short fiction. He also served as Ireland Professor of Poetry from 2010–2013. He was born in Dublin though he has lived in places throughout Europe, Africa, and Asia. He currently lives in Dublin with his wife, Irish novelist Deirdre Madden.

Herod’s Dispensations will be published on March 1, 2019 and is now available for pre-order!