National Poetry Month is the largest celebration of literature on the globe. The month of April is meant to encourage readers of all ages to engage with poetry in some way, to illuminate the important mark it has made on the cultures of so many peoples. The Academy of American Poets established NPM in 1996. Since then, the celebration has grown through its outreach to public agencies, educational leaders, poets, publishers, and arts organizations. 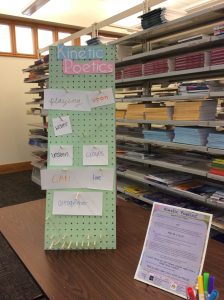 Here at Wake Forest University we too celebrated NPM in a few different ways. To involve our community in the worldwide celebration of poetry, ZSR Library and WFU Press co-sponsored some interactive and informational installations for the duration of April.

WFU Press interns installed three blank canvases that provided the backbone for a collaborative poetry project called “Kinetic Poetics.” These installations were pegboards fitted with an abundance of pegs and word cards that could be placed on the boards and moved around. In the placement of the word cards, students and faculty alike participated in the poetics of this community. Building up, pulling apart, moving, and replacing the different cards around the boards encouraged everyone to show how they can be an important part of NPM on this campus. The boards were placed in various locations around ZSR Library.

In addition to Kinetic Poetics, two display cases in the entranceway to the library featured and celebrated poets from the Wake Forest community. Poets recognized included current WFU Poet-in-Residence Amy Catanzano and other current faculty who have published poetry, as well as a number of alumni and past faculty. To fully render Wake Forest’s poetic history, we also displayed books written by current and former WFU poets ranging from faculty to staff to alumni. Among the books on display were collections written by former professors Maya Angelou and A.R. Ammons, alumna L.C. Williams, and WFU Press poet Caitríona O’Reilly. The books in the display cases cover a range of topics, forms, and times, and are a testament to the relationship the University has with the art form.

One of the biggest highlights from this year’s NPM was the Poetry Salon on Thursday, April 20th. The Salon was co-sponsored by the Creative Writing Program and WFU Press. In its pilot year, these regular readings have already become a staple of the literary community on campus. Where better to keep the poetic celebration alive? At the Salon, student poets shared their own, or their favorite, poetic works to a raucous and appreciative crowd in the Ammons Lounge in Tribble Hall. Some of the works were poignant, others were funny; but all were challenging and insightful. 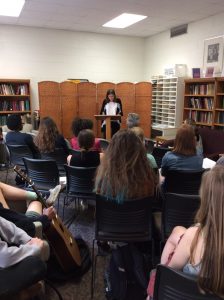 If you collaborated in the community Kinetic Poetics installations, read at the Salon, or even appreciated anything from the display cases, we would love to see what memories you made. Tweet us at @WFUPress and @zsrlibrary, and use the hashtag #npm17!