Poem of the Week: “No More Sea” by Louis MacNeice 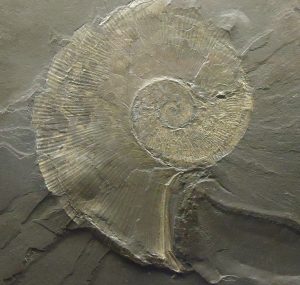 Island and mainland life converge in the image of the fossil, a relic of a living “island” that once dwelled in an ancient sea.  By locating the discovery and misapprehension of the fossil on the mainland, Louis MacNeice eulogizes the islander’s experience of an existence surrounded by, yet distinct from, the protean ocean.

Dove-melting mountains, ridges gashed with water,
Itinerant clouds whose rubrics never alter,
Give, without oath, their testimony of silence
To islanders whose hearts themselves are islands;

For whom, if the ocean bed should silt up later
And living thoughts coagulate in matter,
An age of mainlanders, that dare not fancy
Life out of uniform, will feel no envy—

No envy unless some atavistic scholar
Plodding that dry and tight-packed world discover
Some dusty relic that once could swim, a fossil
Mind in its day both its own king and castle,

And thence conceive a vague inaccurate notion
Of what it meant to live embroiled with ocean
And between moving dunes and beyond reproving
Sentry-boxes to have been self-moving.