Poem of the Week: “Laertes” by Michael Longley 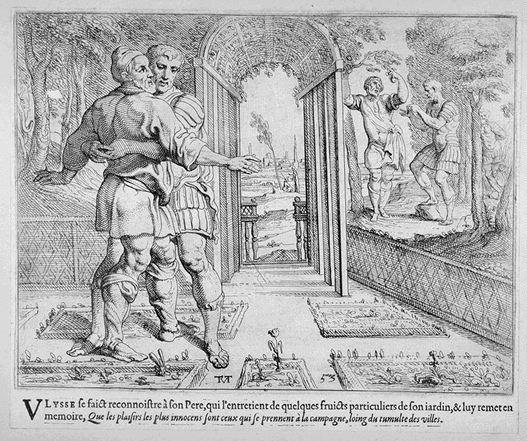 Michael Longley’s interest in Greek myth has woven in and out of his work since his first publication. His poetry is poignant and reminds us that myths usually have deeper layers of truth and emotion held within them. “Laertes” depicts the moment when Odysseus first sees his father, Laertes, after 20 years away spent fighting in the Trojan war and then trying to get home to Ithaca and his family. During this time Laertes has been depressed, refusing to go near the family’s old home, instead living in a farmer’s hovel. Laertes is one of the most honorable kings and fathers in Greek myth; He was a hero who sailed with Jason and the Argonauts, who was faithful to his wife, and who abdicated his throne when Odysseus came of age to become a farmer. Stories like his are usually reduced by being contained to myth, but through Longley’s artistry, the beauty of the relationship between Laertes and Odysseus, and the tragedy of lost time, become tangible.

When he found Laertes alone on the tidy terrace, hoeing
Around a vine, disreputable in his gardening duds,
Patched and grubby, leather gaiters protecting his shins
Against brambles, gloves as well, and, to cap it all,
Sure sign of his deep depression, a goatskin duncher,
Odysseus sobbed in the shade of a pear-tree for his father
So old and pathetic that all he wanted then and there
Was to kiss him and hug him and blurt out the whole story,
But the whole story is one catalogue and then another,
So he waited for images from that formal garden,
Evidence of a childhood spent traipsing after his father
And asking for everything he saw, the thirteen pear-trees,
Ten apple-trees, forty fig-trees, the fifty rows of vines
Ripening at different times for a continuous supply,
Until Laertes recognised his son and, weak at the knees,
Dizzy, flung his arms around the neck of great Odysseus
Who drew the old man fainting to his breast and held him there
And cradled like driftwood the bones of his dwindling father.