Poem of the Week: “Roger Hilton, November ’64” by David Wheatley 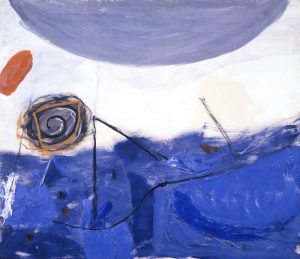 To celebrate the release of David Wheatley’s The President of Planet Earth, we’re sharing a poem from the volume that connects to the book’s cover image: November ’64 by the abstract artist Roger Hilton. The painting features the artist’s distinct use of whites, reds, and and blacks in that period of his life to create balanced compositions. Hilton liked to say that an artist is “a man swinging out into the void,” a sentiment Wheatley touches on in this poem. Wheatley writes of “deeper-than-deep blues you catch,” echoing the cover’s main color scheme as well as the endless potential for creation.

‘We either touch or do not touch’
across the tides that circulate
from Cornish sound to silver north;
in nets of colour, past the Firth,
we find our misplaced eyes too late
in deeper-than-deep blues you catch.

A spar, a prow, a rock, the sun:
they are not fixed but follow courses
framing patterns known to brush
and nib alone, now smooth, now harsh;
take our tributes with our curses
who helpless face the storm-waves down.

A man is gathering limpets from
the shore past which the trawlers scud
like fairground nags that rise and fall,
gauzed in the haar through which I feel
our ruin drawn tight like a coat
with not one light to see us home.

Sydney Graham reach me a hand.
I read behind the forms a tale
that falls away and leaves the forms,
the floods of light that burst their frames
and bursting launch the canvas sail
I still believe can find your strand.

–David Wheatley, from The President of Planet Earth (2017)