Poem of the Week: “Spring” by Alan Gillis

The Irish celebrate St. Brigid’s Day on February 1 to welcome the beginning of spring. Even though we’re not quite there yet in the US, today’s poem by Alan Gillis channels that sense of anticipation for the end of winter. In an interview with the Edinburgh Review, Gillis discusses his experimentation with the pastoral form in city poetry:

“I think I’m drawn specifically to where the urban and pastoral are in proximity: the woods at the edge of town, the public park. But, in fact, I don’t really like the distinction between urban and pastoral. Whatever’s going on in one surely goes on in the other? I’ve been reading a bit of ecocriticism in relation to poetry. Surely it’s a serious mistake to think only of the rural in terms of ecology? The ecosystem of the city can’t be distinguished so absolutely from that of the countryside: it’s a continuum, linked by human error. Indeed, in the city we might best learn to lay down our innate imperialism, re-orientate ourselves. So I don’t see how a poet who’ll only speak of plants and animals is somehow more profound than others. But aye, I like the names of plants, and I like opening out to—what should we call it?—the non-human organic, or running away from it. If the interior/exterior dynamic is at the core of the lyric, then I guess this is refracted differently in pastoral spaces and urban spaces. And I need both in my poems. But the idea that they also form a continuum seems important.”

This sense of a continuum between natural and urban environments seems to be at work in “Spring,” our Poem of the Week.

You might have butterflies
for no reason, all antsy
as if in anticipation
of the leaves’ first look-and-see-me.

You might crack your nut trying to take in
the what of it, its here and this
while it lifts its skirts to brush by you,
fleeting past with one light kiss.

Bare-knuckled sycamores start wearing green.
Cherry blossom froths and pirouettes
in a brook, trickling past these streets
and estates, sloshing beneath tarmac,

streaming along in the green-glinted leaf-swish
and ripple of a petal-scented zing,
and with it flows all that we know of the here-
it-comes and there-it-goes of everything.

–Alan Gillis, from Scapegoat and Other Poems (2016) 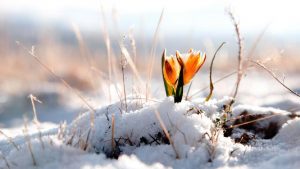