Poetry in Pop Culture: “poems change people’s understanding of what’s going on in the world” 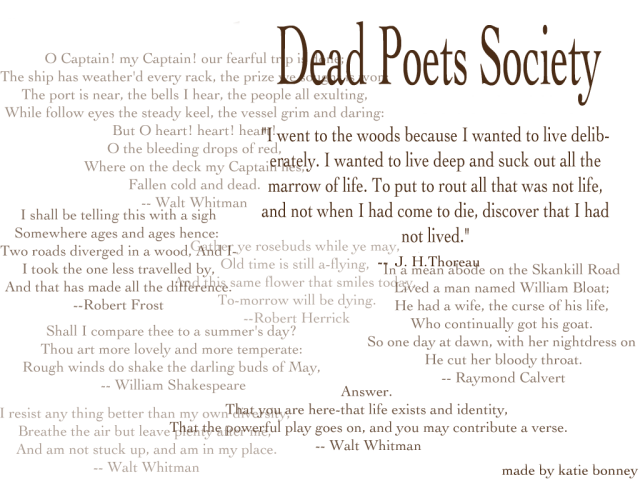 Who said the technological age is taking people further away from literature? Perhaps it is true that millennials are reading fewer tangible books and more electronic books, but according to an article by The Irish Times this past weekend, poetry is popping up in pop culture all over the place.

Maureen Kennelly, director of Poetry Ireland writes, “Whether in a book or on ‘Mad Men’, ‘Breaking Bad’ or ‘The Simpsons’, poems change people’s understanding of what’s going on in the world”. Kennelly notes, “it’s only a matter of time before Stuart Carolan, the writer of Love/Hate, references Paula Meehan or Austin Clarke”. (WFUP poet, Meehan, has recently gained more popularity as she develops her role as Ireland Professor of Poetry).

So what is it that has sparked the recent use of poetry in pop culture? I think the answer lies in the fact that verse appearing on screen is not new to our society. While certain platforms such as the 1989 movie Dead Poet’s Society highlight poetry directly, more subtle poetry references have appeared in television and movie scripts throughout the 20th and 21st centuries.

It is no secret that poetry often carries an emotional weight unmatched by prose. So, when your favorite fictional character spouts off well-known lyrics, there is an added dimension, making that moment just a bit more dramatic and by extension, quotable. And voilà-Twitter explodes with the newly uncovered words of Robert Frost or Frank O’Hara, just because Don Draper said them.

In recent years, poetry has also been featured in TV advertising campaigns. In 2009, McDonald’s launched an ad in the UK in which actor David Morrissey’s poetic recitation is dubbed over snapshots of families, children, an elderly persons as they commune over fast food. The ad’s poem was written by Tony Malcom and Guy Moore, and contains lines “And the Gothy types/and scoffy types/and like-their-coffee-frothy types/were just passing by” to quote a few. In spite of the cheesy, sing-song lyrics, the result was emotional and evocative, particularly in light of the negative press McDonald’s often stirs ups.

(For an alternative (cheekier) version of the ad click here).

“Verse has always been used in adverts – memorable language and the expectancy of rhyme are powerful – but it has to be used respectfully” says poet Roger McGough.

Regardless, if featuring poetry in movies, television and ad campaigns is making poetry more accessible to prospective readers, I think that is one step in the right direction. So keep an ear out, because who knows when you might hear Eiléan Ní Chuilleanáin’s or Conor O’Callaghan’s words roll off your favorite star’s tongue.

Just for fun: The Favorite Poets of Pop Culture Characters