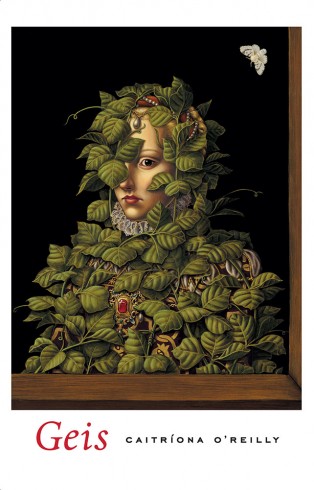 In her third collection of poetry, Caitríona O’Reilly presents a cabinet of curiosities, landscapes ranging from Iceland to Iowa, and a cast of characters including Jackson Pollock, Camille Claudel, and Clint Eastwood. Moving between the scientific and the supernatural, O’Reilly is consistently sharp with language that is Latinate, tactile, and intuitive, what Michael Longley has called “formally versatile and linguistically copious.”

Wake Forest University Press is pleased to add Caitríona O’Reilly to our roster. The publication of Geis marks her North American debut and follows two critically acclaimed prior collections, The Nowhere Birds (2001) and The Sea Cabinet (2006). However, O’Reilly is no stranger to American poetry. Her influences can be traced to Emily Dickinson, H. D., Sylvia Plath, John Haines, and Spencer Reece. The Irish Times has recently compared her to the Irish-American poet Marianne Moore. She is also no stranger to Wake Forest. She was Poet-in-Residence during spring 2012, and selections from her first two books were included in The Wake Forest Book of Irish Women’s Poetry and The Wake Forest Series of Irish Poetry, Volume One. You may have already encountered poems from Geis, which were recently included in the September issue of Poetry edited by Patrick Cotter and the transatlantic issue of Ploughshares edited by Neil Astley.

Though there is much of the familiar to be found in Geis, there is also much that is strange. Indeed, the strangeness seems to come from the realization that it is familiar. In these poems about insects, flowers, sickness, airships, myth, and snow, the world becomes both clear and cryptic, intimate and, at times, ominously delicate. In exploring the edges of the unconscious, Caitríona O’Reilly reveals those ridges in the fabric that are so startling to find.

Geis will be published in mid-October and is available for pre-order on our website now.