Poem of the Week: “Noon at St. Michael’s” by Derek Mahon 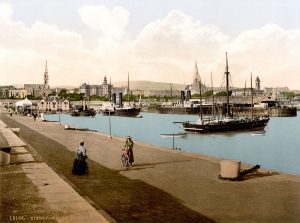 In “Noon at St. Michael’s,” Derek Mahon uses the specificities of place as an entry point for memory, following the tradition of poems like William Wordsworth’s “Tintern Abbey.” The sun, the rain, and the sound of the sea all emphasize, rather than detract from, the speaker’s thoughts. The shape of the poem echoes the repetitive rushing and pounding of waves in the bay—a constant backdrop to his memories.

Nurses and nuns—
their sails whiter than those
of the yachts in the bay, they come and go
on winged feet, most of them, or in ‘sensible’ shoes.
July, and I should be climbing among stones
or diving, but for broken bones,
from the rocks below.

I try to read
a new novel set aside;
but a sword-swift pain
in the left shoulder-blade, the result
of a tumble in Sheridan Square, makes reading difficult.
Writing you can do in your head.
It starts to rain

on the sea,
suddenly dark, the pier,
the gardens and the church spires of Dun Laoghaire.
You would think it was suddenly October
as smoke flaps, the yachts tack violently
and those caught in the downpour
run for cover.

But in a few
minutes the sun shines again,
the leaves and hedges glisten as if with dew
in that fragrant freshness after rain
when the world seems made anew
before confusion, before pain;
and I think of you,

a funny-face
but solemn, with the sharpest mind I know,
a thoughtful creature of unconscious grace
bent to your books in the sun or driving down
to New York for an evening on the town.
Doors open wherever you go
in that furious place;

for you are the light
rising on lost islands, the spéir-bhean
the old poets saw gleam in the morning mist.
When you walk down Fifth Avenue in your lavender suit,
your pony eyes opaque, I am the man
beside you, and life is bright
with the finest and best.

And I have seen,
as you have not, such is your modesty,
men turn to watch your tangle of golden hair,
your graceful carriage and unhurried air
as if you belonged to history
of ‘her story’, that mystery.
You might have been

a saint or a great
courtesan, anachronistic now
in some ways, in some ways more up-to-date
than the most advanced of those we know.
While you sit on your sun-porch in Connecticut
re-reading Yeats in a feminist light,
I am there with you.