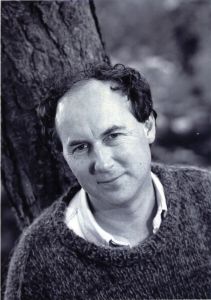 Lara Marlowe, author and Washington correspondent to The Irish Times, stated in an interview with the Irish Echo that you’re Irish if “you delight in language, enjoy good company and never lose touch with the sadness that runs through all things.”

Although Marlowe is American, she maintains a  residence in Ireland and is a world-traveled journalist.

In the interview, Marlowe discusses writing, books, and traveling, but it is her love of Ireland and France that is most revealing in her taste for books.  Marlowe names Irish poet Harry Clifton’s Secular Eden: Paris Notebooks published by Wake Forest University Press as her first choice of the most memorable and pleasurable books for reading.

Her interest in this book of poetry is understandable due to the fusion of Irish and French culture that still retains what Marlowe initially described as inherent to being Irish—a delight in language.

Clifton’s Secular Eden is inspired by a series of notebooks kept while the poet lived in Paris and provides “a mediation on sex and marriage, exile and history, the bright and the dark of human happiness in a secular age.”

Like Marlowe, Clifton is a world-traveler and he maintains a unique relationship with his Irish heritage, and he explores and defies traditional Irish stereotypes with his unconventional take on religion.  The title of his book  depicts the dichotomy between the secular realm—a sphere devoid of religion—and that of the religious realm with the use of the term ‘Eden,’ the paradisial garden described in Genesis.  In the eponomously named poem “Secular Eden,” Clifton’s language is ripe with religious imagery when depicting his everyday Parisian surroundings.”With its locked-up Church, and its one cafe, / Illuminates the flag of State / At the end of the Seventh Day.”  The poem offers a meditation of the evolution of belief and the divide between Church and State but despite this, it doesn’t come across as world-weary but reveals a certain underlying excitement in the journey of the individual: “No-one will ever fall from grace / Where the bells are electric.”

While Marlowe and Clifton may reflect on their travels through reading and writing, I believe Clifton says it best when he states, “Wanderers, after many years, / You are where you were meant to be”.

If you are interested in Harry Clifton’s work, his new book, The Winter Sleep of Captain Lemass, will be published by Wake Forest University University Press later this spring.