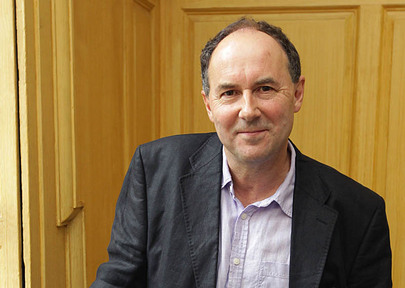 This past week, Harry Clifton gave his final lecture as Ireland Professor of Poetry, marking the end of his three year appointment to the post. Soon, Clifton will step down to make way for the newly-announced Paula Meehan, who will be the sixth poet to take the position.

Clifton spent one year at Queen’s University Belfast, one at Trinity College Dublin, and one year at University College Dublin. He follows in the footsteps of John Montague, Nuala Ni Dhomhnaill, Paul Durcan, and Michael Longley as former Professors of Poetry. Many of his lectures over the past three years are kept on the Ireland Chair of Poetry website.

But, like the leaves of autumn changing on the trees, Clifton is transitioning. The Holding Centre, a book of poetry that Clifton wrote while in his position as Professor of Poetry, will be released in the United States this winter.

“And me, in Nineteen Ninety One,
Drinking beer in the autumn sun,
Watching the drift, on Bahnhofstrasse,
Of the indestructible bourgeois class.
Should I raise my glass,
Salute them, saying ‘You have won,
The century is yours…’”