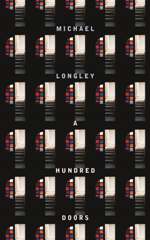 Literary critic William Logan isn’t the easiest on poets. Ever.

But we agreed with something he said in his recent New Criterion review of Michael Longley’s latest book, A Hundred Doors, which WFUP published last May.

“Longley’s father won the Military Cross in World War I (a medal equivalent to the Silver Star). The immediacy and aggression of the poems about the war are like a jolt of electricity:

Squatting—a sniper’s target—
Nothing to wipe your arse with
Except letters from home—
Love letters—ink and skidmarks—
Radiant blue and shit—
And there was no grass either.

The grass would have been something else to wipe with. The sacrifice of those intimate words, the soldier’s utilitarian calculation of comfort, the details as pungent as ‘skidmarks’—there have been few poems about the Great War as steel-eyed and unforgiving, yet recognizing that even the call of nature is a part of war, too.”

The lines he quoted are from the poem “Bumf.” The beginning of the poem (and the preceding three lines to his quoted passage) are: