Poem of the Week: “Sleep and Spiders” by Caitríona O’Reilly 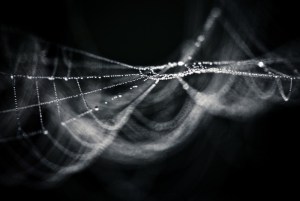 We are looking forward to kicking off next year’s publishing calendar with Caitríona O’Reilly’s newest volume. But since it’ll be many months until we can share those poems with you, we chose one of her poems, “Sleep and Spiders,” from The Wake Forest Series of Irish Poetry, Volume I. As the editor of that volume writes, O’Reilly’s voice is “consistently striking and original,” a statement that continues to hold true.

It is too strange to kill.
The symmetry of its eyes,

its eight paired legs askew
on the lintel, exoskeletal

and tiger-striped, all digestion.
It looks sudden but is still

for hours, eyes on stalks,
awaiting news from hair-triggers

that might be legs or fingers
(the whole thing a claw)

come to touch me in sleep—
hammock from which

–Caitríona O’Reilly, from The Wake Forest Series of Irish Poetry, Volume I (2005)

Categories: Caitriona O'Reilly, Poem of the WeekTags: The Wake Forest Series of Irish Poetry, Volume I