Poem of the Week: “Don’t You” by Alan Gillis

Chock-full of pop musical references, “Don’t You” uses multiple perspectives to tell a humorous, universal story about potential late-night romance. Gillis seamlessly interweaves pop lyrics to create an amalgamation of iconic phrases that become fresh within the context of the poem. Readers will recognize song lyrics from the likes of The Police, The Human League, Eurythmics, Bruce Springsteen, and more. 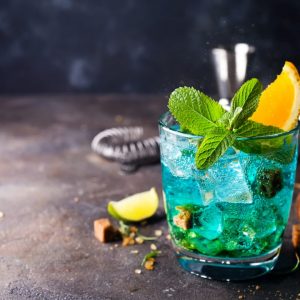 I was working as a waitress in a cocktail bar,
that much is true. But even then I knew I’d find
myself behind the wheel of a large automobile,
or in a beautiful house, asking myself, well,
if sweet dreams are made of these, why don’t I travel
the world and the seven seas to Rio, and dance there
in the sand, just like a river twisting through the dusty land?
For though you thought you were my number one,
this girl did not want a gun for hire,
no bright-spark who was just dancing in the dark.

You were working as a waitress in a cocktail bar,
when I met you, and I believed in miracles:
every step you took, I was watching you.
I asked for your name, tipped you again and again
and you said, Don’t—don’t you want me
to fetch you a drink that would turn your pink mouth blue?
Don’t you think this tenth tiny chaser is ten times bigger than you?
Don’t you talk about places and people you will never know.
Don’t you symbolize femininity by use of the letter O.
And I said, Don’t you want me, baby? Don’t you want me…

–Alan Gillis, from Scapegoat and Other Poems (2016)

Categories: Alan Gillis, Poem of the WeekTags: Bruce Springsteen, Eurythmics, Scapegoat and Other Poems, The Human League, The Police