This month, we’re very pleased to announce the publication of a new Selected Poems/Rogha Dánta by the Irish-language poet Maírtín Ó Direáin (1910–1988). Having grown up on Inis Mór (the largest of the Aran Islands) and later living and working in Galway and Dublin, Ó Direáin was a poet caught between two shores, and his work often wrestles with the tension between rural and urban, the traditional and the modern. The book was selected and translated by Frank Sewell, who in his introduction explains how Ó Direáin not only preserved and promoted Irish-language culture, but extended the traditions he loved by incorporating elements from outside that tradition.

We hope this poem will entice you to read further. The book cover features mosaic artwork by Barbara Derrane, a contemporary artist from Inis Mór. Check our website again in a few weeks, when we’ll publish an extensive interview with Frank Sewell about his process putting together this selection.

It’s all patience—my craft.
I’m like a fisherman
Waiting for a trout.

Easier to catch
A fish by the fin
Than a poem
When the tide is ebbing.

I’m like someone
Who has missed his chance,
And come away with nothing.

Where did they go—hook,
Line and sinker, my bait and rod?
Where did I lose my catch?

Between two shores
Are the fish I want,
Between two traditions
My chance slipped past. 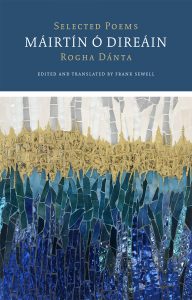 Often called “Ireland’s unacknowledged poet laureate,” Máirtín Ó Direáin (1910–1988) was one of the foremost poets of the Irish language in the 20th century. Born and raised on Inis Mór, he grew up speaking Irish only. He later lived in Galway and Dublin and worked as a civil servant. Pól Ó Muirí, writing in the Irish Times, said that Ó Direáin “is part of the founding trinity of contemporary poetry in Irish … who gave voice to a new sensibility, whose work struck a chord with readers.”

Selected Poems/Rogha Dánta by Máirtín Ó Direáin, selected and translated by Frank Sewell, was released in the US by WFU Press on September 1, 2020.