Poem of the Week: “The Poet as Black Sheep” by Michael Hartnett

In his sequence “Notes on My Contemporaries,” Michael Hartnett dedicates the third poem to fellow poet Paul Durcan. Durcan has been writing and publishing since the 1960s. He was born in Dublin, and his most recent poetry collection is The Days of Surprise, winner of the Lifetime Achievement Irish Book Award in 2014. In this poem, Hartnett looks deeply into the sometimes dark contrast between the poet’s mind and the world around him.

The Poet as Black Sheep

I have seen him dine
in middle-class surroundings,
his manners refined,
as his family around him
talk about nothing,
one of their favourite theses.

I have seen him lying
between the street and pavement,
atoning, dying
for their sins, the fittest payment
he can make for them,
to get drunk and go to pieces.

On his father’s face
in sparse lines etched out by ice,
the puritan race
has come to its zenith of grey spite,
its climax of hate,
its essence of frigidity.

Let the bourgeoisie beware,
who could not control his head
and kept it in their care
until the brain bled:
this head is a poet’s head,
this head holds a galaxy. 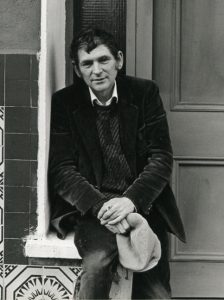