Poem of the Week: “Seals at High Island” by Richard Murphy

The calamity of seals begins with jaws.
Born in caverns that reverberate
With endless malice of the sea’s tongue
Clacking on shingle, they learn to bark back
In fear and sadness and celebration.
The ocean’s mouth opens forty feet wide
And closes on a morsel of their rock.

Swayed by the thrust and backfall of the tide,
A dappled grey bull and a brindled cow
Copulate in the green water of a cove
I watch from a cliff-top, trying not to move.
Sometimes they sink and merge into black shoals;
Then rise for air, his muzzle on her neck,
Their winged feet intertwined as a fishtail.

She opens her fierce mouth like a scarlet flower
Full of white seeds; she holds it open long
At the sunburst in the music of their loving;
And cries a little. But I must remember
How far their feelings are from mine marooned.
If there are tears at this holy ceremony
Theirs are caused by brine and mine by breeze.

When the great bull withdraws his rod, it glows
Like a carnelian candle set in jade.
The cow ripples ashore to feed her calf;
While an old rival, eyeing the deed with hate,
Swims to attack the tired triumphant god.
They rear their heads above the boiling surf,
Their terrible jaws open, jetting blood.

At nightfall they haul out, and mourn the drowned,
Playing to the sea sadly their last quartet,
An improvised requiem that ravishes
Reason, while ripping scale up like a net:
Brings pity trembling down the rocky spine
Of headlands, till the bitter ocean’s tongue
Swells in their cove, and smothers their sweet song. 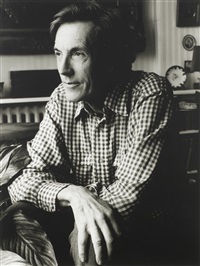