Poem of the Week: “Polar” by Caitríona O’Reilly

Caitríona O’Reilly opens her poem “Polar” with an alarming statistic, which imbues the poem with a sense of the grave and growing danger we find ourselves in due to climate change. Her close look at the details of a polar bear’s existence elevate the creature to mythic status, especially in light of their predicted diminishment. 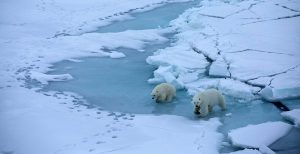 By means of this the photon
is deflected into darkness,
our white-heat leaking from us.

A great absconded god of emptiness
hunted the groaning floes,
scattering waves and particles from his coat,

his hair hollow as birds’ bones.
Intervals of immense, glittering distance.
Then the animal-heat of fur,

of blood and membrane, and hot breath,
the black-tongued breath of the sea.
He tasted the breath of whales,

he haunted the boundaries—
ice-rim and earth-rim; the whetstone sky
on which scents sharpened,

on which his breath hung its own strange statues.
Mage of the edge,
who knew his material in all its aspects,

this yearly raising of dense liquid
to frazil, nilas and pack-ice;
its boundless transformations.

Always, he was equal to the whiteness
of his kingdom; totem and numen
to a universe now present, now absent.

Who will bury him like the Chukchi,
his huge head indicating true north,
amid libations and the pouring out of oil?