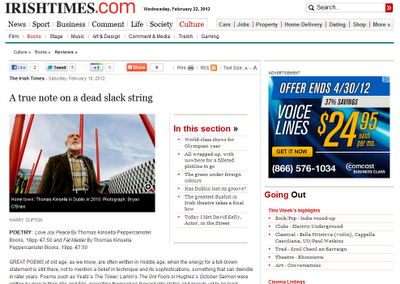 This weekend, some of you may have seen that our very own Harry Clifton wrote a review on yet another one of our poets, Thomas Kinsella, for this Saturday’s Irish Times!

In the review, Clifton writes that in the later work of poets, “we find a flattening out of the poetic line, a casualness that can be constructed either way, as new refinement or disintegration of the psyche.” However, in using excerpts from Kinsella’s latest releases from Peppercannister, Clifton illustrates how the evolution of Kinsella’s work constitutes a synthesis of form rather than a simplification: “With Thomas Kinsella, who has been refining his poetic line for more than 60 years, the whole thing has been stripped to an essence, a kind of dry, careful annotating of the deepest physical and metaphysical intuitions.”

Not surprisingly, music and song have always been important elements for Kinsella, at times heavily romantic, as in Mahler or Sibelius, but here replaced by Bach, in whose name a humble utilitarian aesthetic is invoked, poetry no longer as ecstasy but as day labour: “I rest my faith / In the orders of earthly genius / The day labourer … / Ben Johnson’s mortal Beloved /… that sweat to write a line. / Bach working to the occasional requirement / —the lordly need— daily, methodical, / Into the heart of matter.”

In looking at the poem that we posted just last week, “Artists’ Letters” (1978), we can see the exact shift in Kinsella’s lyrical tendencies that Clifton is talking about. The lines of “Fat Master” are shorter, the pace seems more somber, but most importantly, the speakers’ approaches to writing are completely different. In “Fat Master,” the artist’s pen no longer seems to “plunge repeatedly / at the unique cliché, cover / ache after ache of radiant paper / with analytic ecstasies” nor does it seem to “wrestle in repetitious fury” (“Artist Letters”, Lines 34-7). Instead, in approaching his poetry as a “day labourer[,]” and pushing through “that sweat to write a line[,]” we can see that Kinsella has mastered the art of shaping his poetry himself, instead of allowing the poetic impulse shape him.

Nevertheless, in taking the time to look back upon the temporal perspective of “Artists’ Letters,” we have an opportunity to catch Kinsella’s formal transition just as it is beginning to occur. While the speaker writes with the ferocity of a young lusty male, he is still, nonetheless, an older man reflecting upon his style of writing during an earlier time. It is this reflectivity and awareness that seems to bridge the divide between Kinsella’s earlier works and his latest collection. In the end, Kinsella’s own words can be used to summarize the nature of the transformation that has taken place:

as the young career
grows firmer in excited pride
and moves toward authority
after the first facetiousness,
the spirit shaken into strength
by shock after shock of understanding