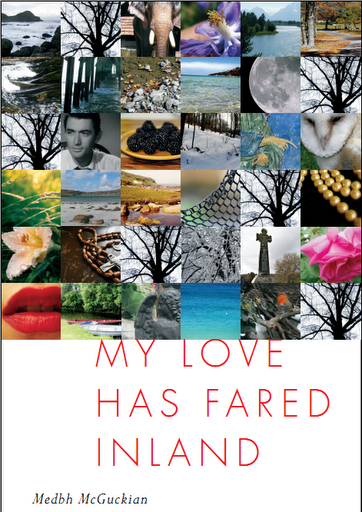 The Antioch Review provided a lovely insight into both the cover art and the poetry of Medbh McGuckian’s My Love Has Fared Inland. Describing the cover, Smith writes:

“Just look at this, the reader might say, with the critics who have emphasized the painter’s practice within McGuckian’s poems: ‘A gray trembling flame left the ceilings / in profound darkness which gave them / a patriotic look, as if they were peppered / with handwritten letters, or fingers / seemed to walk across the breast’ (‘Duncairn Balanda’). And listen: that word peppered, worth a poem by itself, suggesting not only violence, pungency, carelessness, but the overlay of one design upon another: ‘this beggar, myself, could light a butter-lamp / to consult round mirrors in a rich cup / of acanthus roots, or lay a Tibetan Carpet / over a Chinese sofa without even attachment’ (‘Child of the Wheel’). And see as Emerson saw, when the eye of reason opens, how necessary (again from ‘Child of the Wheel’: ‘If I do not go there the soul-lake / where amazing omens of her death arose / does not produce any images—’) such seeing is: a quickening.”

After reading this review, some of us here at WFU Press began to wonder, what exactly does Smith mean by the last line, that “such seeing is: a quickening”? After giving the phrase some thought, I’ve come to the conclusion that Smith is using the idea of “a quickening” to describe the metaphysical experience that McGuckian creates through her use of layered images as well as layered text. As Smith notes in the word “peppered,” each of McGuckian’s poems evoke a new stream of ever-shifting visions, not only through the distinct images she creates, but through the individual words she uses to create them. With these various images, McGuckian’s readers are never in the same place very long, if at all. Between the floating quality of McGuckian’s text and Smith’s reference to Emerson’s spiritual writings on Nature, the idea of “a quickening” in the final line can be read two ways. In one way, it is the experience of a vast variety of images transitioning at shutter-speed, and in another, it is also the inevitable quickening of time that occurs when one encounters an experience with the sublime.