Poem of the Week: “Persephone Suffering from SAD” by Nuala Ní Dhomhnaill 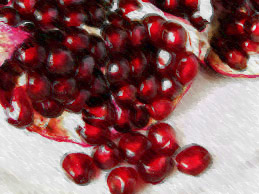 Nuala Ní Dhomhnaill’s The Water Horse is a particular gem because of the collaboration of three great female Irish poets; Ní Dhomhnaill’s poems are in Irish, with English translations by Eiléan Ní Chuilleanáin and Medbh McGuckian. These poems present other convergences, particularly the mingling of mythology with modern life as in today’s poem, where we encounter the Persephone of Greek myth in current times.

A quick note: The Irish phrase in the last line, Céad Míle Fáilte, is a common greeting meaning “a hundred thousand welcomes.”

Now don’t go ringing the cops,
Mum, and don’t be losing the bap:
I admit I was out of line
and over the top
when I hitched a ride
with that sexy guy
in his wow of a BMW.
But he was such a super chat-up
I couldn’t give him the push.

He booked us a foreign holiday
no travel agent runs—
his car so jet-propelled with revs
the engine soared on wings.
He said he would buy me velvet gowns
and satin underthings,
and his credit’s fine. He leaves
me space, though I’d have to say
there’s not much light in the place.

He’s signing me the title deeds
to all his stately homes.
He’s for putting my name in lights
as a star on the silver screen.
He has me flooded with rings
and pearls, but the menu’s pretty thin—
I’ve just been served a pomegranate:
it’s crimson, dripping with seeds—

a veritable Céad Míle Fáilte of drops of blood.