Home  ›  Arts and Culture  ›  A Lil’ Bit of Lit. Crit.: The Vocal Landscapes of Vona Groarke

A Lil’ Bit of Lit. Crit.: The Vocal Landscapes of Vona Groarke 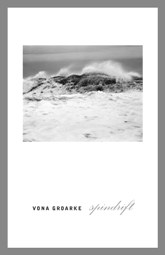 In the Spring 2010 issue of Poetry London, W.N. Herbert of Newcastle University wrote an article on “Approaching Simplicity” in which he compares the works of poets Billy Collins and Don Paterson to our very own Vona Groarke. Looking at Groarke’s most recent publication with the Press, Spindrift, Herbert writes:

Vona Groarke’s work finds itself in the difficult stand-off between the visual and the verbal. These senses and language are each the subject of painstaking examination, revealing an artist daring herself to find expression for often evanescent states. As befits someone caught up in landscape, its meanings and depiction, this collection develops the schism between observation and expression into a contrast between locations—essentially Ireland and elsewhere in the UK or US. So it weighs embeddedness against the transitory assessing the values and the cost of each. There is an alertness here that refuses to leave any phrase unexamined.

From the very title, one can presume at the onset of reading these poems that landscape plays a crucial role in the shaping of Vona Groarke’s collection. In fact, even if one does not pick up on the significance of the title right away, Groarke does her readers the courtesy of defining Spindrift in the opening pages: “spindrift, n. spray blown from the crests of waves by the wind.”

As previously stated by Herbert, the collection “develops the schism between observation and expression” through the process of contrasting two locations. However, despite Groarke’s attention to landscape, the formal means through which she compares these environments and unravels this schism may surprise you.

Among the many locations Groarke writes about in Spindrift, one just happens to be Wake Forest University Press’s hometown, Winston-Salem, North Carolina. After seeing the title’s reference to physical landscape, I dove into Spindrift expecting to immediately pick up on specific illustrations of the campus and its surrounding neighborhoods. Conversely, what I found was a cultivation of space that was much subtler, and yet, much truer than the setting I had originally anticipated. While physical landscape is a major motif in most of Groarke’s work, the elements she uses to shape her American environments are voice and sound. For example, when writing of North Carolina in the poem “Away,” Groarke does not mention the campus’s sprawling magnolia trees or the ever-changing facades of Deacon Blvd, but instead, the space comes alive through her adjustments to looser forms like “slower vowels” and “higher daylight hours” (14).

One can also see this vocalization of landscape in the poem “An American Jay.” Once again, while Groarke never mentions where her classroom is, her descriptions of her conversations with students illustrate an environment that is at once particular to Wake Forest’s campus culture, but also, as Herbert argues, one that reflects the changing priorities of the greater American landscape as a whole: “I remind Sally about the sonnet I’m still owed. / She smiles, says she’ll get to it after her midterm on Hamlet. / I’m not sure if she thinks I’m quaint or just plain odd.” In contrast, when Groarke does write about physical landscapes, as she does in “Some Weather,” the human voice is the first element to go. Instead of sounds, what the reader receives here are the images collected from Groarke’s visual observations.

In the end, what Groarke has essentially done with the American poems in this collection is taken the idea of a spindrift and turned it upside down: instead of starting with large physical forms and drawing her poetry outward to the smaller details, she uses the marginal elements of her environment to bring each physical space into being.