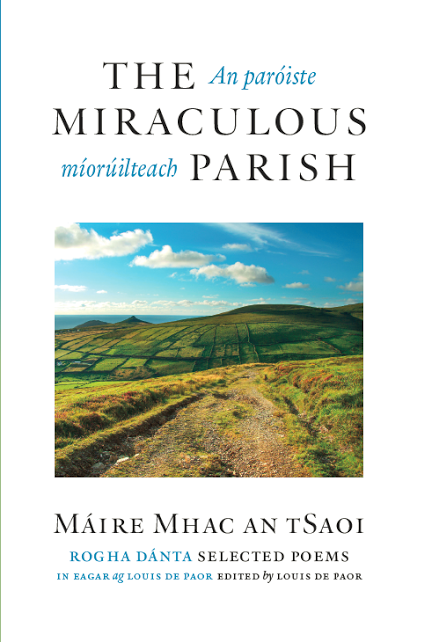 Wake Forest Press will publish The Miraculous Parish, a bilingual volume of Máire Mhac an tSaoi’s poetry this May. An activist and visionary, Mhac an tSaoi has paved the way for such female literary giants as Eavan Boland, Medbh McGuckian, Eiléan Ní Chuilleanáin, and Nuala Ní Dhomhnaill. The Miraculous Parish solidifies her reputation as the greatest living Irish language poet. The title refers to Mhac an tSaoi’s early childhood in the “miraculous parish” of Dún Chaoin (Dunquin), a Gaeltacht village in County Kerry, where she learned Irish.

In the author’s preface, Mhac an tSaoi writes, “I remember a distinguished Celtic scholar saying, ‘When a Dunquin man has said something to his satisfaction, it is poetry’. It is a standard I may not have achieved, but it is the one I aspire to. God rest the many gifted souls who tutored me!”

In Irish, with translations by eleven Irish poets, the volume encompasses her life of poetry, with selections from her entire oeuvre.

Born in 1922 (her memoir is entitled The Same Age as the State) Mhac an tSaoi has been witness to and participant in the transformative events of nearly a century. Her father, Seán MacEntee was a founding member of Fianna Fáil and part of the Easter Rising of 1916. Her mother, Margaret Brown (de Brún) was an Irish Republican, and her uncle Monsignor Pádraig de Brún was one of the most respected scholars of the Irish language in the 20th century. Mhac an tSaoi married Conor Cruise O’Brien, an Irish politician, writer, and historian, and joined him in many political causes.

For the first time in North America, readers can enjoy a deep selection of the poetry of this extraordinary writer in both Irish and English. To pre-order the book, simply go here.